Every time I think about grandfather Francis, I think of an image of a spring afternoon in 1953. As a six year old boy I was sitting on country lane, watching him carefully plowing soil in the field, literally cuddling each lump of clay, tore weeds and picking stones. 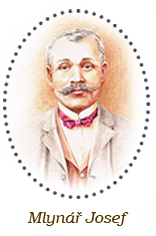 Stones were on the edge of the field, where they formed some kind of dam. In Wallachia people call them "hromadiska".

My boyhood experiences that obviously influenced my whole life I actually owe to an accident. I started my school in Petrovice near Karvina with teacher Olga Belikova. Soon I fell sick with a whooping cough and on the recommendation of a doctor Rottaegla mom took me to my grandfather Francis to Frenstat pod Radhostem as she said to breathe fresh air.

Back in my childhood I first met with the cultivation of buckwheat and its sowing, harvesting and threshing. Grandfather Francis explained that buckwheat needs a freshly plowed land because it germinates before the weeds. "It is a big mistake to plow fields in the autumn and in the spring only drag it before sowing. The weeds will infect the entire field ahead of the buckwheat." he said. He never fertilized fields before sowing, so plants would not grow unnecessarily high and would not sink to the ground. The buckwheat was always sown where in the previous year potatoes or beets were planted. These ancestral wisdoms which my grandfather Francis passed down to me were kept somewhere in my head and later on, when I decided to continue Smajstrla's family mill tradition I began to recall.

RecipesContacts
Copyright © 1996-2017, Pohankový mlýn Šmajstrla s.r.o.
Facebook
Ecommerce solutions BINARGON.cz
Cookies + GDPR
Pohankový mlýn Šmajstrla s.r.o. and partners need your consent to the use of individual data so that they can, among other things, show you information about your interests. Click on the "OK" box to give your consent.
Privacy